How to treat your employees | Inspirational Story | Corporate Training |...

Posted by Green Wind Solutions at 16:01 No comments:

How to get fund for startup business | Milton M Joseph | Malayalam #Star...

Posted by Green Wind Solutions at 15:44 No comments:

Change your business from a Promoter Driven to Process Driven

Posted by Green Wind Solutions at 11:45 No comments:

Posted by Green Wind Solutions at 12:43 No comments:

Posted by Green Wind Solutions at 01:38 No comments: 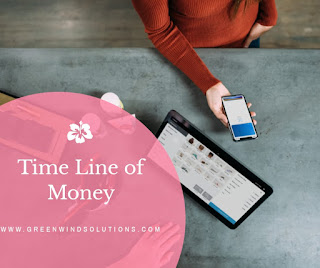 
FROM SHELL MONEY TO CASHLESS ERA

No rights of gain unless everybody gains - Plato

The history of humans using cash currency does go back a very long time .From upper Palaeolithic period, the primitive men used exchange of goods and engaged in trade along with barter system. Money measures a method of payment, a standard of value, a store of wealth and unit of account. Over its vast history, money has been central to developing the trade network and for the progress of business world. The Journey of currency travelled from Mesopotamian shekel emerged nearly 5000 years ago to present Crypto and digital currencies.

In ancient civilisations the coins were manufactured from copper and the iron because they were strong materials used to make weapons and the monetary value of currencies was based on the value of the metal from which they were made. Coinage era boost trade in ancient world and it treated as trusted medium of exchange. Later on precious metals such as gold, lead, silver were used for minting coins and standardised forms of coins were first used by Lydians, who become the first culture to make coins. In India coins were minted firstly in 6th century BC by the Mahajanpadas ( republic kingdoms of ancient India) known as puranas but with irregular shapes, standard weight and later many kingdoms includes Mauryas, Turkish sultans of Delhi, Mughal empires followed their own and distinct currency system and minting of coins.

Its interesting fact that shell money was also served as a legal currency until 19th/20th century in different parts of Asia and Africa. In ancient Mayan civilisation cocoa beans and chocolate had evolved to become a currency. In Roman ancient empire a person who owned a salt production site was very wealthy and sometimes salt also used as a currency. In human history polished stones, dried banana leaves rings and jewellery, beaver pelts, cocaine, buckskins, whale’s teeth etc was also used in different parts of the world

Paper money and bank notes was fist used in china during song dynasty, between 960 -1279.The convenience of transactions provided by the issuance of bank notes allowed notes used for exchange to become widespread and commonly accepted business practice. In the 18th century, the bank of Hindustan general bank in Bengal issue paper currency firstly issued in British India

After World War II and the Bretton woods conference most countries adopted “fiat money” whose value was determined according to the USD. In turn, the USD was determined by reference to gold.IN 1971, the US government ended the convertibility of dollar in to gold to help combat the great depression, and today majority of the money worldwide stopped being backed by gold reserves.

In India RBI started in 1935 empowered with bank note production. RBI issued bank notes which carrying the portrait of George VI and after independence, new notes were designed with the image of Lion capital of Ashoka, the national emblem replaced the portrait of George VI.RBI issued Mahatma Gandhi Series in 1996 which replaced all bank notes issued before 1996 and in 2016 Central government demonetised 500 and 1000 rupee notes and introduced new 500,2000,50,100 rupee notes.

The plastic money also plays a vital post in present era and the introduction of debit cards and credit cards acquired popularity and user acceptance at a rapid place. But in future such cards and ATM machines may become totally redundant. APBS ( Aadhaar Payment Bridge system) could be an alternate transaction method as a unique Aadhaar ID linked to their bank accounts and emerge as an alternate platform. Banks can get connect to NPCI (National payment corporation of India) either through NPCI Net or Internet.

The latest revolution in the way we use the money is digital currencies and crypto currencies such as Bitcoin, Litecoin, Ripple, Ethereum etc but still chaos exist the future lies in it. Concern over security breaches and regulatory uncertainty were cited as major reasons for the lack of mainstream enthusiasm in digital coins. Apart from the medium of payment such digital currencies is also an investment instrument, like stocks or precious metals and due to its volatile nature, the value fluctuate in tune with real world events. Such investment may difficult to track the value for auditing and accounting purposes and undisclosed investment in cryptos may cause to increase the money laundering. Web based wallets allow access to bit coins from anywhere and the paper wallets that don’t actually store your bitcoin at all, but give you the ability to set up a private key and address to receive funds for later retrieval.

“ The government does not consider crypto currencies legal tender or coin and will take all measures to eliminate use of these crypto assets in financing illegitimate activities or as the part of payment system. The government will exposure use of block chain technology proactively for ushering in digital economy”

That there may be reasonable steps to be taken to impose taxes on the profits earned through trading cryptos. It may be difficult to complete ban trade on crypto currecies and such digital currencies in India but reasonable measures can be taken and necessary directions can be issued by RBI and in future it may be required to enact a law for digital currencies.

The nature of money and wealth changed in each period according to the society needs and life style of persons and its impact on economy and polity. The future may be a world without cash because our world is growing increasingly digital. Technological based companies push the reality of cashless society to the mainstream. Governments all over the world are also taking steps to advance the cashless narrative. Digital currencies can be designed by central banks for user identities and transaction data to be authenticated and adhering due diligence procedures. Due to the increasing trend of e- commerce such currencies are more advisable to facilitate such online and digital services. A global currency may allow to serve mass people, more access and to move faster around the world. The cashless economy would be a financial revolution in modern era.

The future money may be digital, with the concept of creating assets and liabilities but without any real exchange of any material stuffs of any such kind.

The life of money making is one undertaken under compulsion, and wealth is evidently not the good we are seeking: for it is merely useful and for the sake of something else - Aristotle